…Says Lagos’ll Work With The Police, Judiciary To Combat Rape And Other Vices

Lagos State Governor, Mr. Babajide Sanwo-Olu, has promised to wield “the big stick” on perpetrators of rape, domestic violence and child abuse in the state.

He added that the state will support the police and the judiciary to ensure the crime is brought to the barest minimum.

He gave this warning on Tuesday in his address to Lagosians after the “Walk To Commit and Act” rally organised by Lagos State Government through the Domestic and Sexual Violence Response Team (DSVRT) of the Ministry of Justice to further drive home his message against the menace.

Sanwo-Olu, who said the government is commemorating the day in line with United Nations declaration against gender-based violence added that the State is working hard with its police command and all relevant agencies to bring the crime to zero point.

The Governor emphatically warned that no offender would go unpunished, saying that rape, domestic violence and child abuse are crimes and must be treated as such. 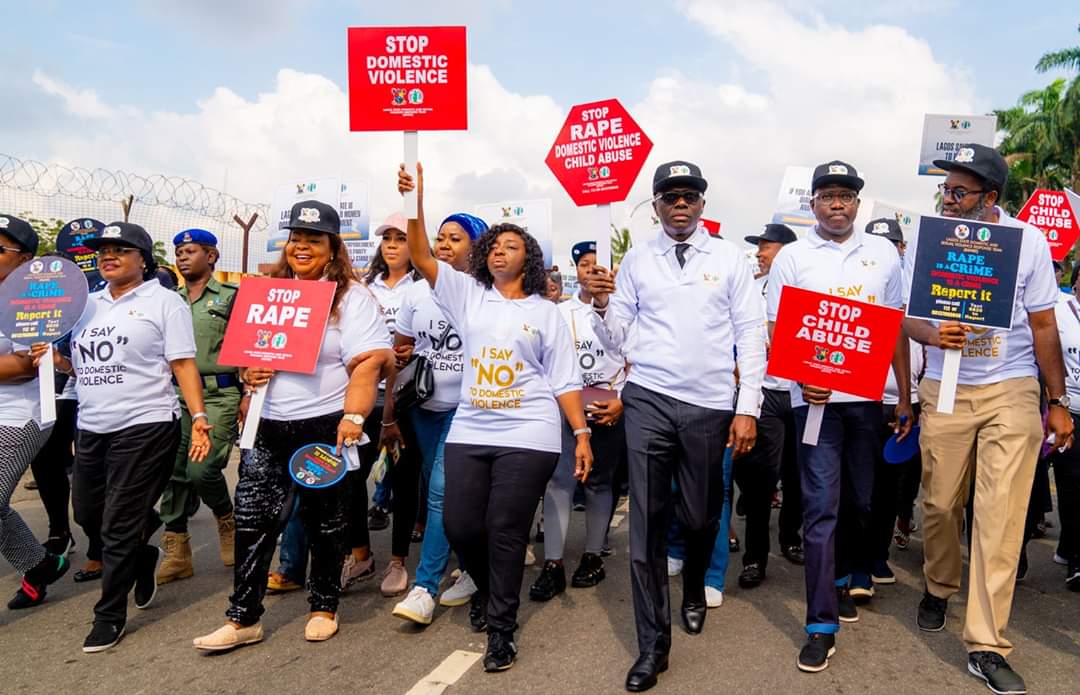 He said: “Lagos state government through the ministry of Justice and other arms of the government, deem it fit that we need to have this walk to further confirm and to indicate our full support for advocacy around the talk of child abuse, the advocacy around rape, against women and girl, the talk around domestic violence, sexual violence and all other vices that are around abuse of children.

“Our government by this walk confirms that we are totally against it, we stand against everything about this issue and we are going to ensure that we have zero tolerance against it.

“It is a crime against humanity. When you are caught in the act of sexual violence, child abuse, domestic violence, you will be made to pay dearly for your crime. So, we are using this advocacy to warn and to tell people to desist because the full arm of law will be brought to bear on anybody or institution found wanting in any form.”

Sanwo-Olu encouraged victims of these acts to open up to necessary authorities noting that the government will take up such issues.

According to the Governor, “It is about time we lived in a civil society and we need to end and ensure that people end the silence. Come forth if anything happens, speak up, and you can be rest assured that you’ll be protected and the government will take up your issue.

“For people that have been all shut out that don’t know who or how to go about it, we have phone numbers that you can call. You can call our 112 or you can call the toll free number which is 08137960048. You can also send your text to 6820. Be rest assured that somebody is on the other side, that will pick up your case and we’ll see to it that justice is served in anyway where we found anybody culpable.”

The State’s Attorney-General and Commissioner for Justice, Moyo Onigbanjo, in his remark, condemned rape and violence in its totality.

Onigbanjo stated that the walk, which is an annual event, is in line with the United Nations convention and practices.

He said, “It is a barbaric act and we frown against violence of any kind and rape against all genders. This walk demonstrates the State’s commitment and zero tolerance for all these acts of violence against women and children.

“So, anyone within the state who wants to commit these offences should be aware that they are going to face the full wrath of the law. That’s why we are taking the walk to show the State’s commitment in compliance with UN convention and practices.”

The event had in attendance the Commissioner of Police, Mr. Hakeem Odumosu, representative of the Chief Judge, Justice Kazeem Alogba; Judges and other top officials of Lagos State Government.

In a renewed effort towards creating awareness on